You know what pisses me off in entertainment…. smart people who are made to make nonsensical dumb decisions for absolutely no reason at all. In many movies, shows comics and even anime there always build up that one character that is usually the anti-hero, anti-villain or straight out the main villain and that individual is usually shown to be ultra intelligent and multiple steps ahead of virtually everyone else to the point where they should easily get away with the crime and/or scheme they plotted. Problem is that the genius is written too well and to have a happy ending the antagonist has to be stopped somehow so they do what I always hate… make the genius make a stupid mistake for no reason at all.

A lot of the times they make it so that the genius is so smart that they must have a big ego as well and it’s the ego that usually causes a blind spot that they overlook that does them in. In the world of Marvel Comics it is seen that from all of the geniuses in that universe it is Reed Richards aka Mr. Fantastic of the Fantastic Four that is the smartest of them all. The only man who is on the same level of intelligence is the man named Victor Von Doom better known as Doctor Doom. Reed and Victor are both the same level of intelligence but because Victor is so egotistical it blinds him to the point where his intelligence is somehow lowered and his schemes are always foiled… and that’s bullshit.

Now I’ve always felt like this because ever since I was a kid I always sympathized with the villain and wanted to either achieve their world domination goals or at least escape and hide out to live and attack another day. So what prompt me to write this entry? It was me watching reruns of one of my favorite shows from the USA Network… Monk. For those that never watched this show Monk was about an intelligent detective name Adrian Monk who was extremely good at his job but he also suffered from having mega OCD and other phobias that got him kicked off the force so he became a private detective that his former employers always hire to solve all their cases… although it’s weird that they kicked him off the force just for him to still solve all of their cases for them but that’s for another argument entry. 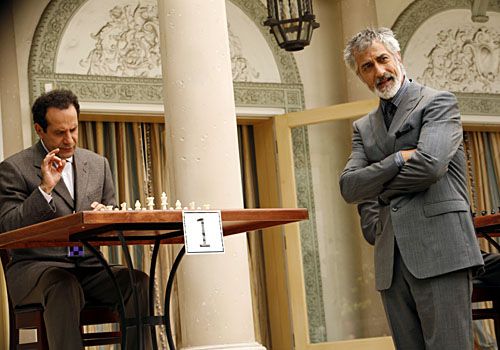 The episode of Monk that triggered me was called “Mr. Monk and the Genius”. In the episode Monk was trying to catch a chess genius that just flawlessly got away with murdering his wife for millions of dollars in life insurance money. He even had Monk stumped and Monk is never stumped. Now instead of riding off into the sunset with the millions of dollars throughout the episode he kept taunting and fucking with Monk for no reason. Monk got so desperate that he was about to do something that is totally against his character… Monk was about to plant fake evidence on the genius because he had no other options.

Ultimately he didn’t do it but the fact that Monk was willing to plant dope on someone for an arrest like he’s Vic Mackey tells you how much the genius had Monk defeated. In the end the genius from all of his verbal taunting accidentally revealed a clue that Monk then use to finally solve the crime and arrest the chess genius and that pissed me off because the villain should have won and become “the one that got away” for Monk but instead they let the chess genius’ ego be his downfall like other geniuses in the media… which would explain Kanye West in the past 10 years but that’s for another entry.

Overall I will forever root for the villain especially if he/she has a relatable back story but I am sad knowing that all villains can’t bejust like The Jigsaw Killer… that motherfucker will never be caught and will leave behind a nice “game” for you to play.